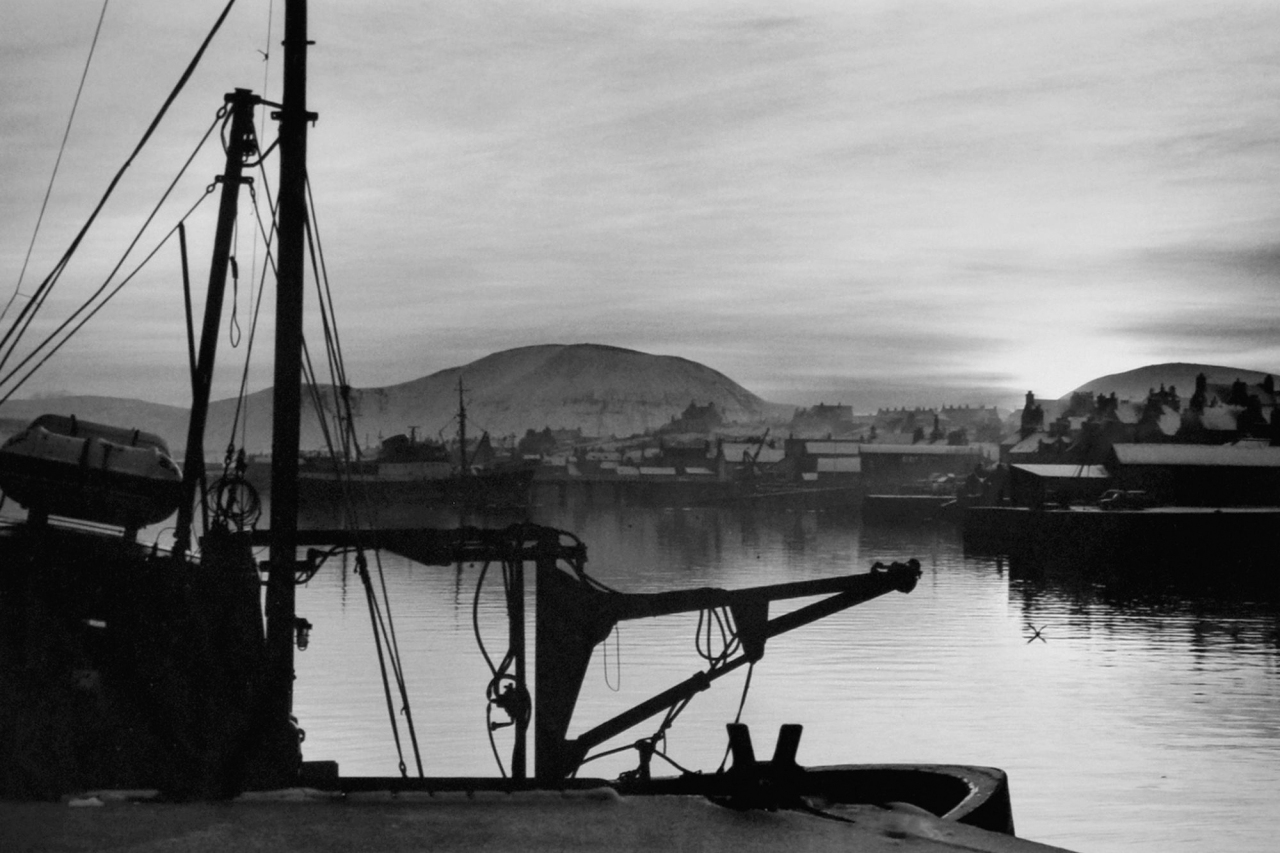 Gunnie Moberg’s photograph Hamnavoe is Work of the Week at the Pier Arts Centre this week in the final week of their wonderful exhibition ‘Portrait of Stromness’. There are two of Gunnie Moberg’s works in the exhibition. Show closes 16 September. 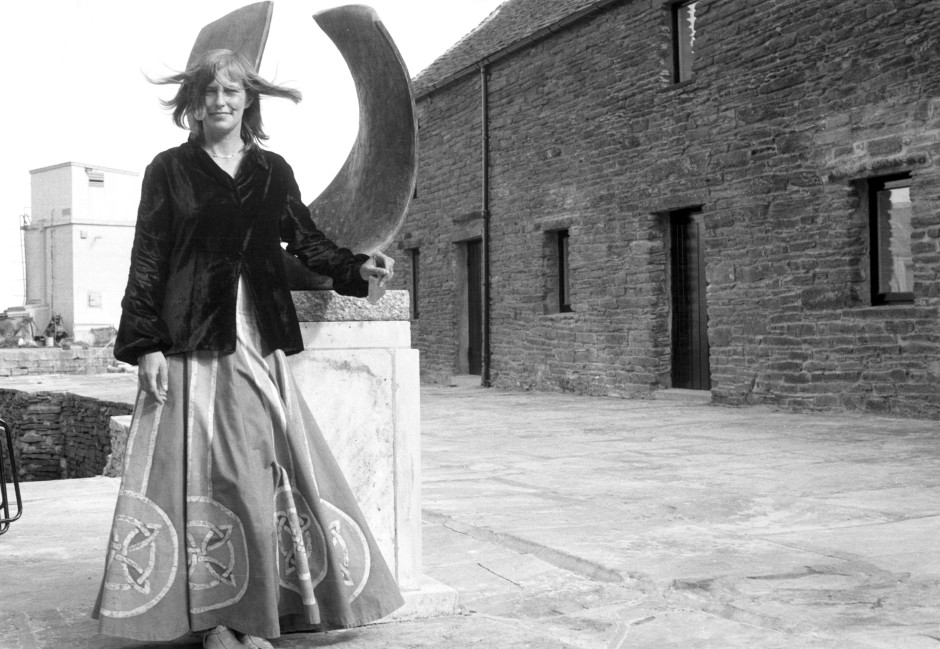 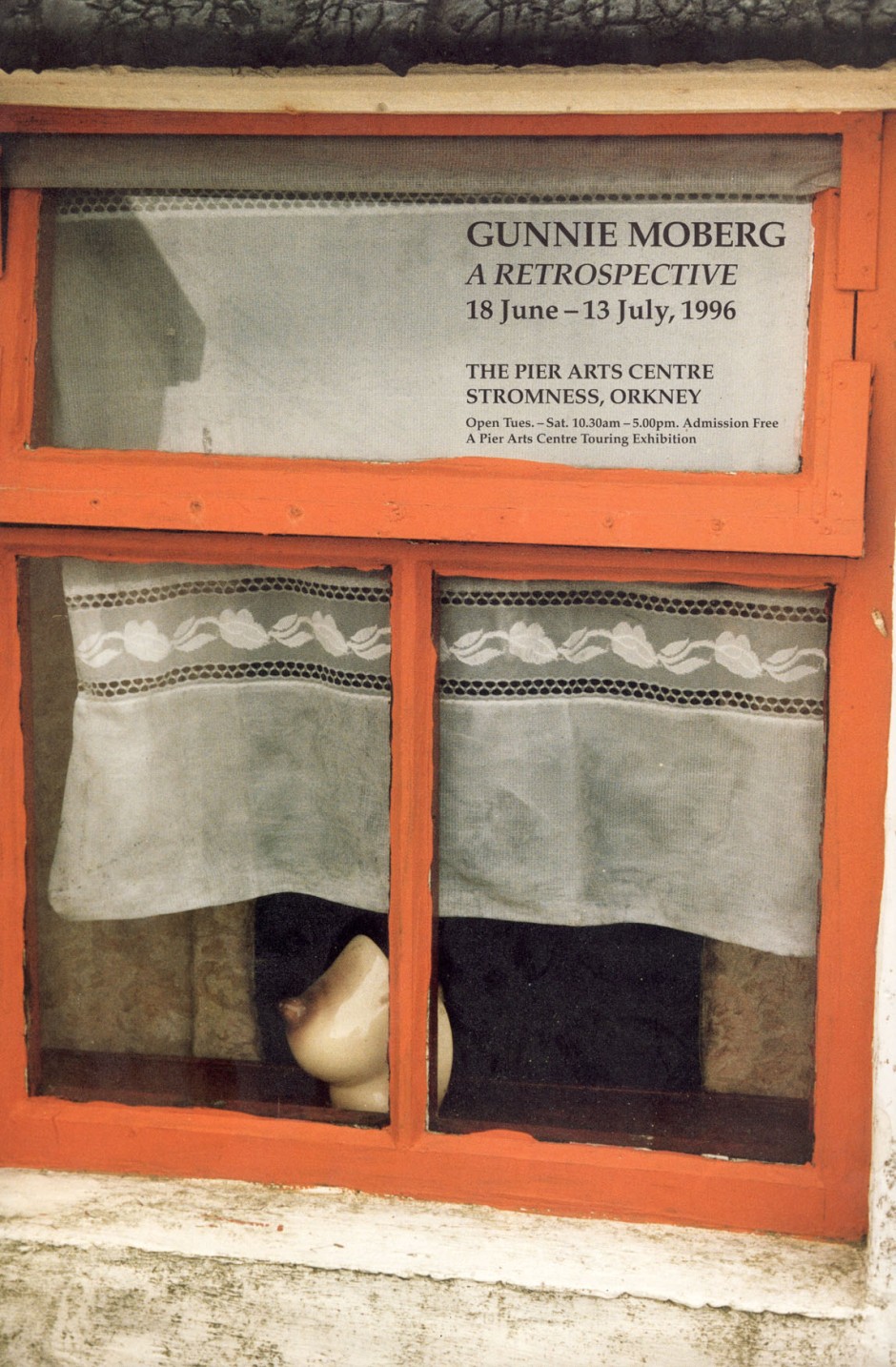 One of Gunnie Moberg’s exhibitions at the Pier Arts Centre.

Gunnie was also featured in this week’s Orkney International Science Festival as one of the people recognised for their contribution to Orkney, science or culture. Yesterday’s  One O’Clock Toast was in honour of Gunnie. Rebecca Marr gave the toast, the text is given here.

Thank you to the Science Festival for inviting me to honour a remarkable woman, the artist Gunnie Moberg.

Gunnie was born in Gothenburg Sweden in 1941. Later Gunnie Moberg would say she would like to be remembered as a Swedish Orcadina. And it is that embedding of Orkney in to the identity of Gunnie and the symbiotic nature of that relationship between artist and place that I would like to draw you to today.

But before she met Orkney Gunnie met the American sculptor Tam MacPhail. The pair met in Edinburgh in a bookshop. Very soon after meeting they married. Rich in love but penniless, they had to choose between an organist for their January wedding or heating for the church. They chose music, and so it was to be for them, with love and art coming before comfort.

Soon 4 boys in quick succession: Colin, Llewlyn, Paul and Tomas. The family by now living in Argyll where Gunnie worked as an art therapist in a psychiatric hospital and made batiks creating designs based on Pictish carvings.

A visit to Orkney in 1975, firstly with her friend Sigrid Appleby, then to exhibit her batiks, was to change life for Tam and the boys. Gunnie returned and announced they were relocating. And so a year later the MacPhails: Tam, Gunnie, four boys, a dog and a cat crammed in a Morris Minor and drove north. Wearied after a long journey and a terrible crossing they were rewarded with a view of Stromness suddenly and beautifully lit by the sun. Gunnie thanked Orkney, she had been worried about what her family were thinking.

Enamoured by the landscape and keen to explore it creatively and taste it all, Gunnnie chose photography as the language in which to express all she felt about her new land. Photography had been a feature of Gunnie’s art practice, she had worked in a photographic studio in Stockholm, but it was only really after coming to Orkney that photography and Gunnie Moberg became so closely linked.

Gunnie’s eye changed how Orkney was seen. Quite literally she changed people’s perspective. Now with Gunnie’s aerial photographs Orkney could be seen from above, flattened in to 2 dimensions. Beautiful, she thought as she hung out of an islander plane, look at the archaeology, walls of settlements drawn in the low winter sun like jewellery designs. Lines everywhere, circles everywhere. Simple and strong shapes. Coastlines like poetry.

These early aerial photographs were published by Stromness Books and Prints in 1979 in the book Stone Built, merely 3 years after she had arrived. That book became the first in a catalogue of some 16 or so publications. Gunnie not only gave Orcadians a different view of Orkney, through her books Gunnie was a creative ambassador for the islands. Her love of islands extending to encircle Shetland and the Faroe Islands. Indeed Gunnie was one of artists selected to make work for the new Scottish Parliament and 11 of her works of Shetland and Orkney are in the collection at Hollyrood.

What Orkney did for Gunnie and what Gunnie did for Orkney is a subject worthy of its own book. Their reciprocal relationship – one that can occur between artist and place in only the most special of circumstances – finds its expression in the artworks themselves. Photographs like love letters to the islands. And as she became familiar with the place, the intimacy grew. The distance between photographer and subject narrowed, now here she was not a 100 ft above the coastline but a few inches from the stones of the shore.

This shifting of scale can be joyously confusing – are we looking at the edge of an island or the rim of a rockpool? In a fractal way that is not important it is all the Orkney. What Gunnie is asking us to do is see and feel.

In her latter years Gunnie turned to her garden for creative energy, making it, making photographs of it. She wrestled an unlikely oasis from her sea-sprayed home with Tam, under the Black Craig outside Stromness, looking out to Hoy. Ravens watching her work.

Gunnie died at home at the Don in 2007. She has left a remarkable legacy in her books, her artworks, her extensive archive now held at Orkney Library & Archive, and possibly too in our minds.

Her expression of Orkney blending somehow with our own response to the landscape. Her photographs influencing how we feel about this place.

So please be upstanding and raise a glass to a remarkable artist, the Swedish Orcadian Gunnie Moberg.