Keith, who volunteers here at the Gunnie Moberg Archive, has just been scanning some of Gunnie’s slides from the publication Pictures & Poems (published by Colin Baxter 1996) . The image above, given the title ‘Conversation of cows’ by George Mackay Brown in his poem to accompany the photograph, reminded Keith of something. It was a story he had heard about jazz saxophonist Tommy Smith who was in Orkney for the St Magnus Festival. The story is recounted in St Magnus Festival: A Celebration (published by The Orcadian 2002):

I always take a visit to the Ring of Brodgar; it’s so inspiring. I visited the site at 7:30am in order to see the long shadows created by a low rising sun; it was spectacular. Alone with the wind and the birds – just like my solo show. In fact in 1991 I played at the Ring of Brodgar and to my amazement a herd of cows lined up….all forty of them.  [Tommy Smith p.81]

The St Magnus Festival is on our minds here. Currently we have Sarah Nicol, Gallery & Museum Intern with the Pier Arts Centre and Orkney Museums, working on the Gunnie Moberg Archive. Sarah has chosen Gunnie’s work as her personal project and has immersed herself in Gunnie’s St Magnus Festival images. Sarah will be putting on an exhibition, holding an open day, and creating a newspaper clippings zine. 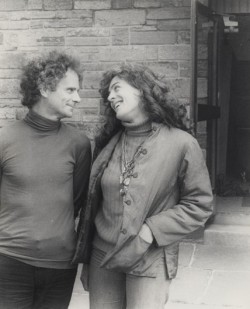 The exhibition, which will be held to coincide with the St Magnus Festival in June, has been given the title ‘They All Come To Me’. This comes from an article written by Gunnie, ‘no, they all come to me!’ she told a newspaper editor who asked if she travelled widely to amass such a portfolio of artists portraits. Read the full article here.

Sarah has been drawn to Gunnie Moberg’s images about friendships and working relationships around the St Magnus Festival. Many of the portraits of artists, poets and composers she has selected for the exhibition are full of conversations. Artists responding to each other.

I was photographed by Gunnie Moberg in a windy courtyard with George Mackay Brown and Peter Maxwell Davies, George and I grinning broadly with our hair everywhere like wild men of the woods, and Max grinning too, but with his curls held under a natty leather cap – a trio of poetry , storytelling, and music caught by the lens like a tiny icon of festive Orkney.   [Edwin Morgan p.1389]

2 thoughts on “Conversation of cows”