If you want to put a name to faces, places and even bales, ask a farmer. A talk about Gunnie Moberg’s farming photography at the recent Orkney Agricultural Society meeting provided the archive with a rich harvest. All of the photographs in this post have been named by the farmers at that meeting – thank you. 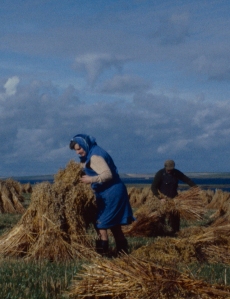 There was speculation that this might be Mary Graham Sinclair of Aith, Sandwick, Orkney. Although in the book The Islands of Orkney (Birlinn 2000) the photograph is titled ‘Upper Sanday, St Andrews’. Mary was featured in Orkney filmmaker Margaret Tait’s agricultural portrait ‘Land Makar’ made in 1981.

‘The croft is West Aith, on the edge of a small loch, which almost every passing visitor stops to photograph or draw or paint. I have been filming this beautiful place since 1977, observing many of the human activities which alter and define how it looks. The croft is worked in the old style, and has unfenced fields, tethered animals, and flagstone roofs. Mechanised aids are brought in when appropriate, but much is done by one woman’s labour. The film is constructed so that the sequences are like a number of canvases.’ – Margaret Tait

You can watch this film on line through the Lux website by clicking here.

Have you tasted bere bannocks? Is that what Annie Craigie has been baking for the table. Bere has been grown in Orkney for thousands of years . Still grown in Orkney and used in brewing and baking, it is milled at Barony Mill in Birsay. The mill have several bere recipes on their website here.

Another well kent face in the Orkney farming world is that of Alf Work, another farmer from the parish of Sandwick.

And Alf was spotted in a fine hat in this photograph from Dounby Show. August’s agricultural shows are the highlight of the farming calendar in Orkney and the dates were a favourite of Gunnie’s too. 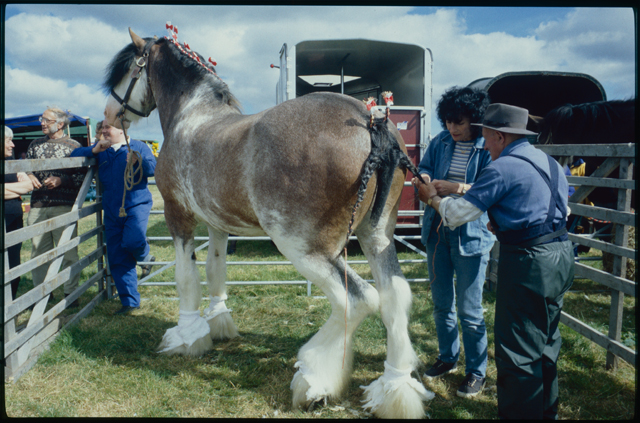 Here at Stromness, some beasts have come over the Pentland Firth on the ferry and are now being sorted out and loaded on to lorries to be taken to farms across Orkney. A good opportunity to see who was bringing home what. The farmers at the Orkney Agricultural Society were able to fix names to the backs of heads, boiler suits and even lorries. This photograph generated a fair amount of discussion about the types of bulls coming home (Charolais and Hereford) and whether the photograph could be roughly dated using the breeds.

From notes taken at the meeting:

Arnold Dunnet is in the Isbisters lorry. At the back, third from right, that’s John Willie Stanger, his wife Ruby, and Jack Stanger, tall man in brown coat. Billy Louper in the lorry. On the right, Albert Thomson in a boiler suit with a hereford bull. Geordie Garson of Gairsty with dark hair, side burns and a green boiler suit.

This image of a farrier at work shows Fraser Anderson of Finstown and his grandson Alan Tait. A photograph take at the same time is published in Orkney Pictures and Poems. 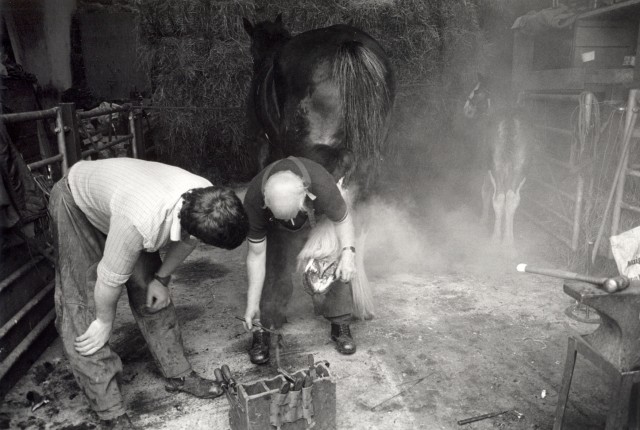 The farmers were good on places as well as faces, and their knowledge suprised us when they named the farm that these bales belong to.

A similar image of this scene is included in the 2006 Birlinn publication Orkney by Gunnie Moberg. The book was part of a series of photographic essays of the Scottish highlands and islands. 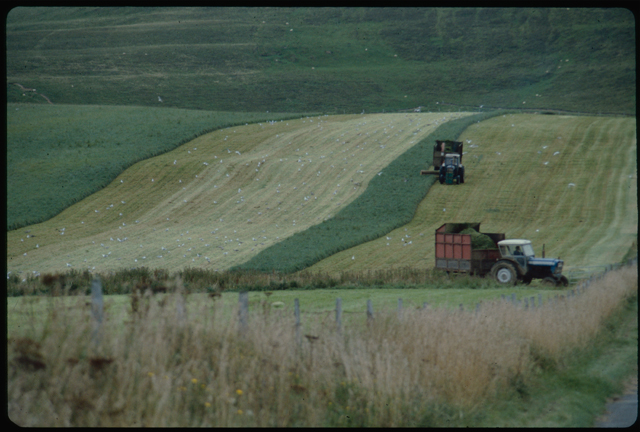 This aerial view shows Rennibister Farm on the road between Stromness and Kirkwall. As well as the farm buildings, the site also has a more unusual construction, an earth house. 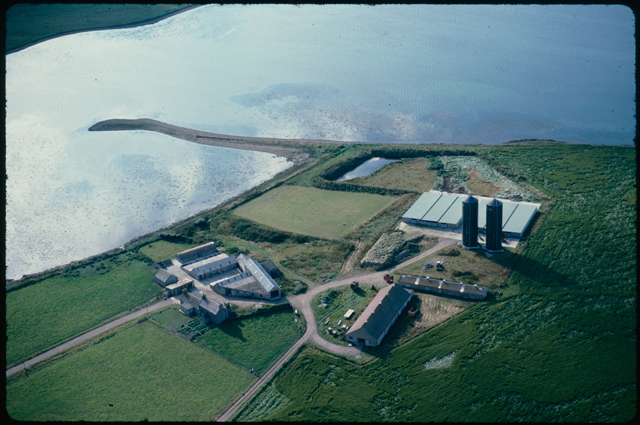 Here in another aerial photograph is a building, possibly a horsemill, thought to be at Tressness on the island of Sanday.

And following the meeting we can now tell you that this building, featured in an earlier post, sits on the farm Hyval in Sandwick. We know because the farmer himself was there, Geordie Spence. 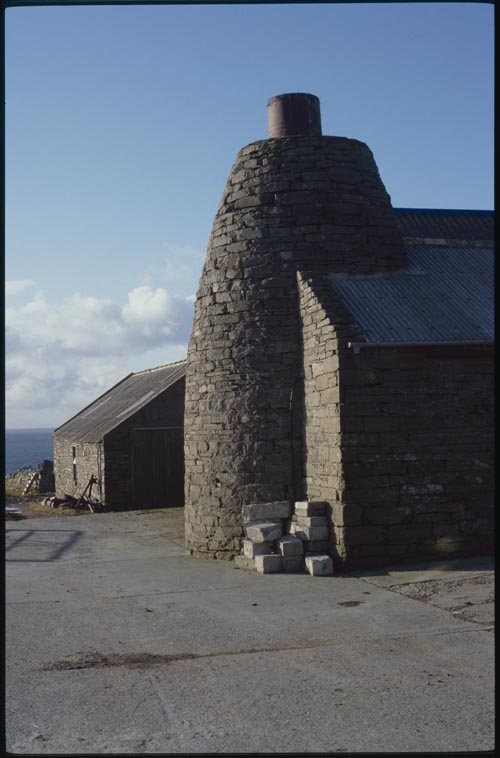 But still some mystery remains, the farmers felt this could be on one of the outer isles, but which?