image: Gunnie Moberg
‘The picture of George which I have shown in exhibitions is one he liked very much himself, with Gypsy, the cat.’

Gunnie Moberg in Studies in Photography

As you may have seen from the last post, Gunnie Moberg’s first show in Orkney was held at the County library in Kirkwall in 1975. Her latest exhibition is also at the library. It’s a different building and a different location but a lovely connection to Gunnie’s first exhibition in the county that would become her home.

A significant part of the Gunnie Moberg Archive is the portraits Gunnie made of the artists, writers and musicians who came to Orkney. For this first mini exhibition since the creation of the Gunnie Moberg Archive, we have chosen six writers. The photographs are interesting because of the subject and what they might reveal of that person, but more, these portraits are great photographs. To compliment this exhibition the Library staff and Reader in Residence, Alison Miller, have gathered together books by the six writers.

‘I photographed George Mackay Brown for 22 years and it was never easy. He didn’t like it.. I have masses of pictures of George with friends. They would be good pictures, but for the fact that George was looking down at his shoes, ‘George, please look up!’ I was to say hundreds of times. Photographing George was not all doom and gloom. We had some funny times together. Once, I took pictures of him for a sculptor who was doing a bust of him..I was walking round and round, standing on chairs, photographing the top of his head, then closing in for the nose, eyes and ears, and all through this George was giving a running commentary on dandruff, snotty children and how his mother told him to wash his ears – ‘so no problem there!’

Thank you to SSHOP for their permission to share this extract

EXHIBITION AT ORKNEY LIBRARY & ARCHIVE, JUNCTION ROAD, KIRKWALL, ORKNEY
From now until the end of August. Open 9:15am to 5pm (7pm on Mondays & Thursdays) Closed Sundays. 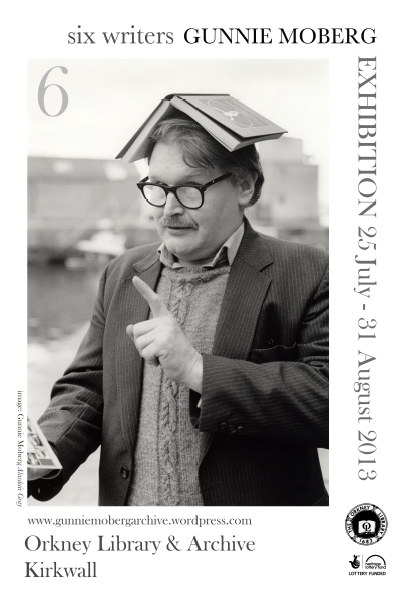